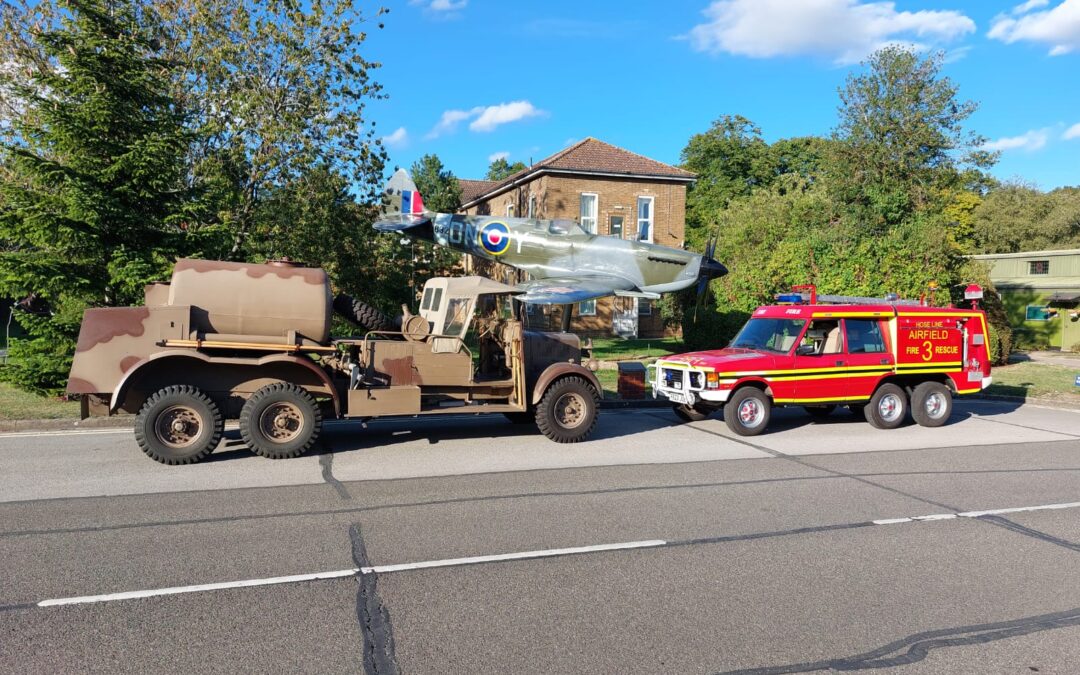 After everyone’s grass was watered during the week, the Museum Staff were greeted with glorious weather as we all turned up to Scunthorpe for another day of work and preparation for upcoming shows which the Museum are planning to exhibit vehicles and the Mobile Display Unit. Next weekend we are showing at Digby Day on Saturday the 3rd and the IBCC Wings and Wheels event on Sunday the 4th. The Boss started as usual by giving everyone a ‘morning-prayers’ brief to catch up with the news and other goings on behind the scenes. Although the museum itself isn’t open, things are constantly afoot to keep the volunteers busy during the week. Everything from organising logistics, accounts management, IT/website updates and even small restoration projects such as continuing to get the seating recovered for the DP1.

After the briefing had finished, two of the volunteers got to work sorting out the Museum’s Transit Van which had failed its MOT this week due to faulty number plate lights. This was quickly traced to a broken wire and rectified before the Van was taken for a retest and it is now covered for another year of hard work supporting us in our endeavors. A small team was also dispatched to the storage area to retrieve the Fordson WOT-1; one of our oldest vehicles that was present at the D-Day beaches 6 days after the initial landing and served in France supporting the RAF in the forward deployed airfields.

After getting through the multiple layers of security and shifting the other vehicles in front of it, the WOT-1 started without any complaints and was trundled out of the shed into the daylight. It quickly became apparent that the pigeons in the shed had taken a liking to the paint work and completely bombarded the vehicle from front to back. Whilst we had covered the vehicle with whatever sheeting we had available, which served it well and had been clarted, it seems this wasn’t enough. This doesn’t bode well for the other vehicles in the shed which will need to be pressure washed and carefully treated to ensure the paintwork doesn’t get damaged in the process. As anyone who washes the car can appreciate, the amount of damage bird droppings can do to vehicle paintwork is quite incredible.

With the vehicle levels checked and dipped we quickly identified that the WOT-1 needed to be refuelled so the team set off to the local fuel station to replenish the tank. The boss duly took the wheel, tickled the gears into their right places and the vehicle was soon purring away down the road without so much as a squeak in the wrong place. We got to the first stop with plenty of people stopping in their tracks to see the WOT-1 rumble by. Unfortunately, we had no luck – the station was clean out of E5 super unleaded which will not damage the vintage engines operating in our vehicles unlike the new E10 standard which has significantly more ethanol.

So, back to square one and off to Scunthorpe on fumes and a prayer that the truck had enough to get us there! Again, the roads were clear and we both were pleasantly surprised at how smoothly the vehicle was running after the carburettor overhaul and engine work that happened earlier in the year. Definitely worth the head scratching to solve the air leak issue with the gaskets. The vehicle was making great progress, and in true Boss fashion, as soon as he mentioned that we could see the next petrol station, the vehicle gave up and died in protest and we were finally out of fuel. Thankfully, we were conveniently close to a bus stop and were able to perch there until our support driver went and got us a small 5 litre tank to get us to the fuel forecourt.

Once we were at the fuel forecourt the tank was filled up as much as possible for £99 and the drivers changed over for a little bit of driver training.  It was shortly after this moment the Boss came to regret that decision. Out of all of our vehicles, the WOT-1 – and probably the 45 Monitor – have the most pernickety gear boxes that require utter focus and attention to get right. Not only does the vehicle need to be at a particular speed for each gear, but the gear linkage also doesn’t have any springs or assistance to aid the driver in hitting the right gate and the gap between gears is minimal. If the event of one of these things not being quite right, at best, it will likely result in a resounding crunch. Worst case, the vehicle will have to be slowed to an acceptable speed to go back down to a lower gear to restart the whole process from scratch, much to the amusement of the car following behind.

After the gear box – and the boss’ teeth – played enough tunes to fill a jukebox, the vehicle finally made it back to the HQ for the first stage of the journey back to Digby for next week’s shows. Here the team descended on it with buckets and cloths to get the dust, grime and the bird droppings removed from it before departing Scunthorpe early to drive back to Scampton and then onto Digby after picking up another vehicle. The boss took the first phase of the journey and this time the gear change curse struck the boss at every opportunity – sometimes it’s just the way it goes.

Thankfully the vehicle got back into the rhythm and made good progress with the other driver in the passenger seat making left turn signals for the driver. Being passengers in most of our vehicles isn’t the most comfortable experience, but the WOT-1 has the added bonus of having an open drivers cab and no windscreen on the passenger side, meaning they get blasted with whatever debris or bugs coming their way. It’s definitely a blessing that it can’t get past 45 mph! After another driver change just before Scampton, the apprentice tried again with the gear changes and finally managed to get mostly good changes which was a marked improvement. Although not perfect, it can only be improved with more seat time which is scarce between shows.

After a quick brew at the boss’ house, we managed to quickly pick up the other vehicle, a TACR-2, and proceed to drive to Digby where the vehicles will be positioned for next week’s shows. Thankfully, this went without a hitch and the boss even managed to get a few pictures of the new and old before coming back home after another incredibly successful day’s work. 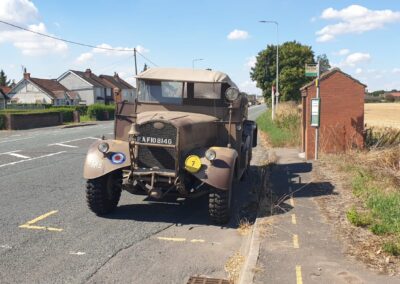 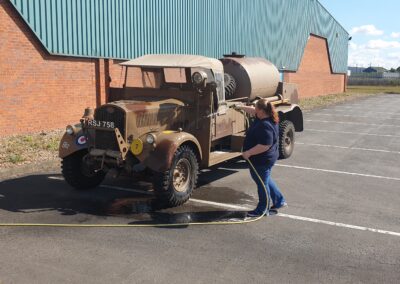