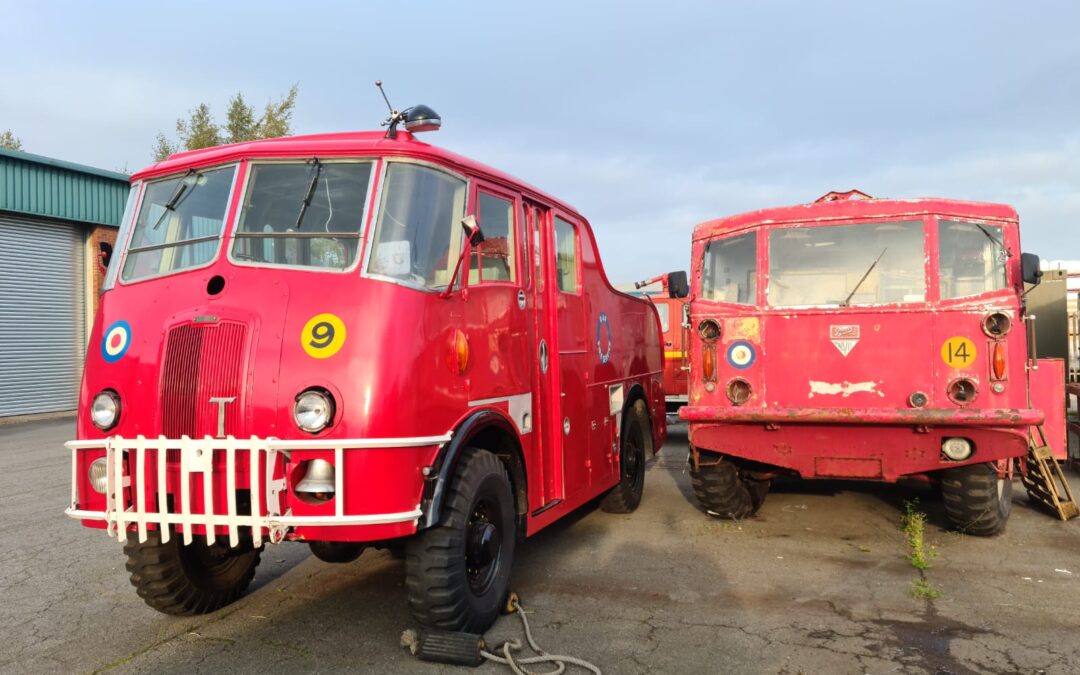 The RAF waved off another Sqn into the history books this week as 27 Sqn RAF Regiment was disbanded this week at RAF Honington. 27 Sqn was the RAF’s Chemical, Biological, Radioactive and Nuclear unit which would respond to any incident which required their specialist knowledge to decontaminate the area and deal with the aftermath of a CBRN incident. 27 Sqn was originally stood up in 1951 as a Light Anti-Aircraft Squadron with the L40/60 Bofors Gun in response to the outbreak of the Cold and the Korean War. In 2011, as a result of the 2010 SDSR, the RAF became the sole provider of specialist Counter-Chemical, Biological, Radioactive and Nuclear capability through 20 Wing, RAF Regiment. The Squadron continued to provide this capability, including helping to decontaminate Salisbury and Amesbury after the Novichok attack in 2018, until it was handed to 28 Engineering Regiment who moved to RAF Honington in 2019 to prepare to take over the capability.

After nature’s best efforts to create a wall-sized water feature inside the Scunthorpe HQ, the team were a bit hesitant about what they might discover when they opened the doors today. Last week’s efforts had thankfully been worthwhile and there was no further damage to the items housed inside. However, there was the small matter of shifting the 50 litres of water that had collected in the various buckets put out to catch the rain last Saturday. This will have to continue until the necessary repairs are carried out to the building. Meanwhile, the volunteers will have to keep praying for good weather and monitor the situation closely as autumn pushes into winter.

The weather this weekend was thankfully anything but autumnal and the team was blessed with blue skies and warm sun so the decision was taken to work mostly around the back of the museum to re-cover the vehicles which have been outside since the building was vacated in 2020. With the vehicles outside for this length of time there are signs of decay and deterioration but the volunteers are working hard to keep them protected as best as they can with the resources the museum has. One of the volunteers also brought their compressor which was given a baptism of fire reinflating tyres which had little to no air in them. Once the vehicles were sitting level, pools of condensed water started to drain out of some very obscure places like the crash bar of the MK6.

The POL store was also emptied and any waste oil or paint was disposed of to avoid it being reused by mistake. The vehicles were also checked for antifreeze and oil levels in anticipation of the weather continuing to deteriorate as winter approaches. The tool store was also reviewed and had some of the more junior members of the team scratching their heads trying to work out the order of imperial spanner sizes. Finally, back inside the HQ, work continued to try and remove as much water from the carpets as possible to help keep the smell of damp to a minimum.

Meanwhile, over at the storage facility, work started to remedy some of the radiator and water pump issues which has plagued the Fordson WOT1 of late. This required the removal of both the radiator and pump to and get them overhauled by a local supplier during the week. This will hopefully solve the leaks and keep the engine running at the correct temperature in the future. The procedure to remove both components was completed very quickly by two of our volunteers as it was only a few nuts and bolts holding them in place.

With the team all gathered back at Scunthorpe in the afternoon, the volunteers spent the rest of the day enjoying their favourite pastime of musical trucks to reposition them into some sort of order for before in preparation of a potential road move in the near future, depending on availability. That left just enough time for a quick brew to finish another very productive Saturday. 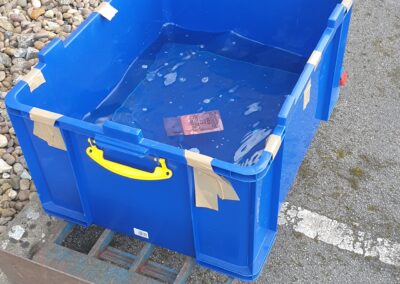 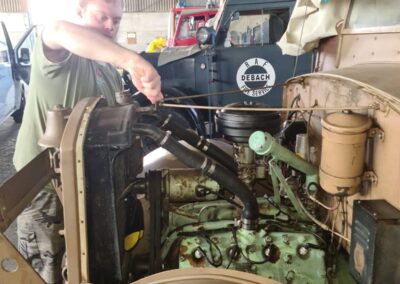 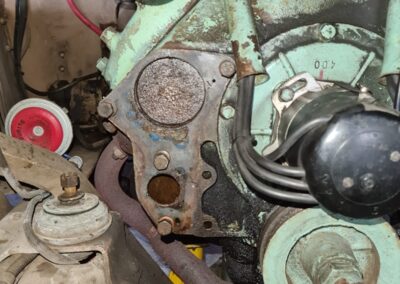 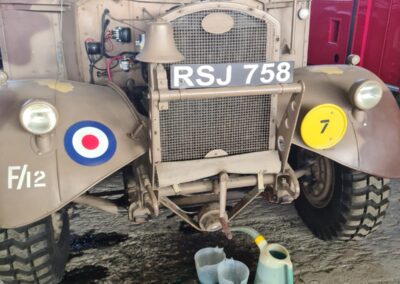 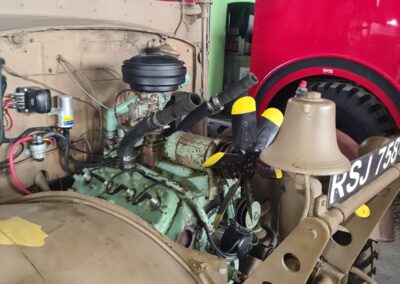 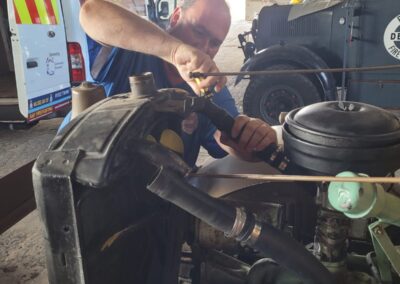 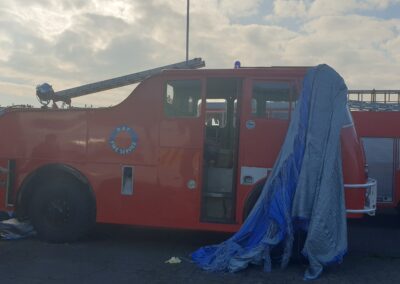 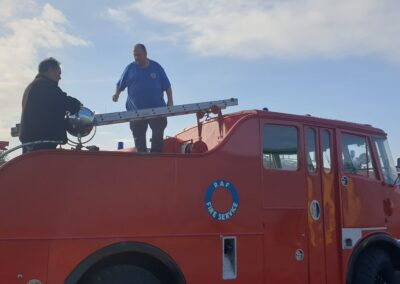 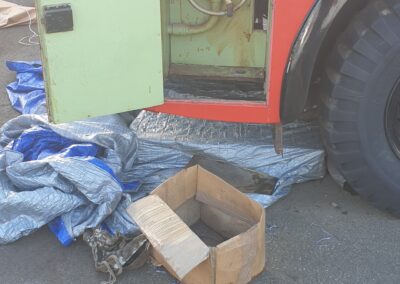 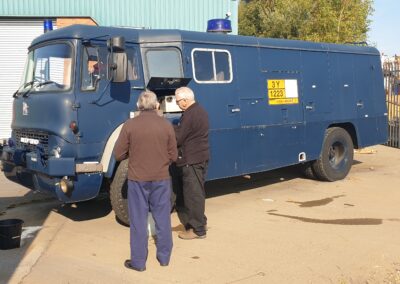 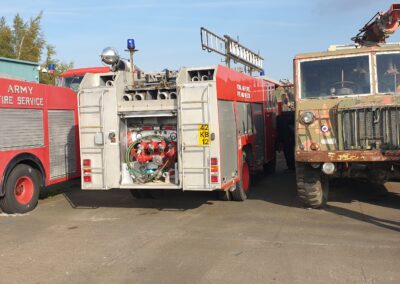 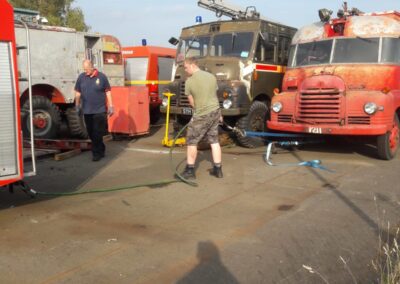 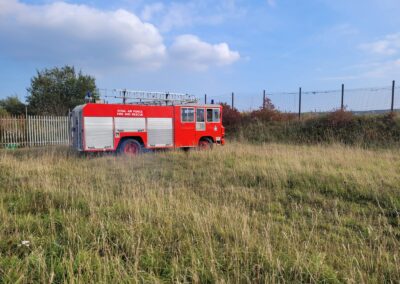