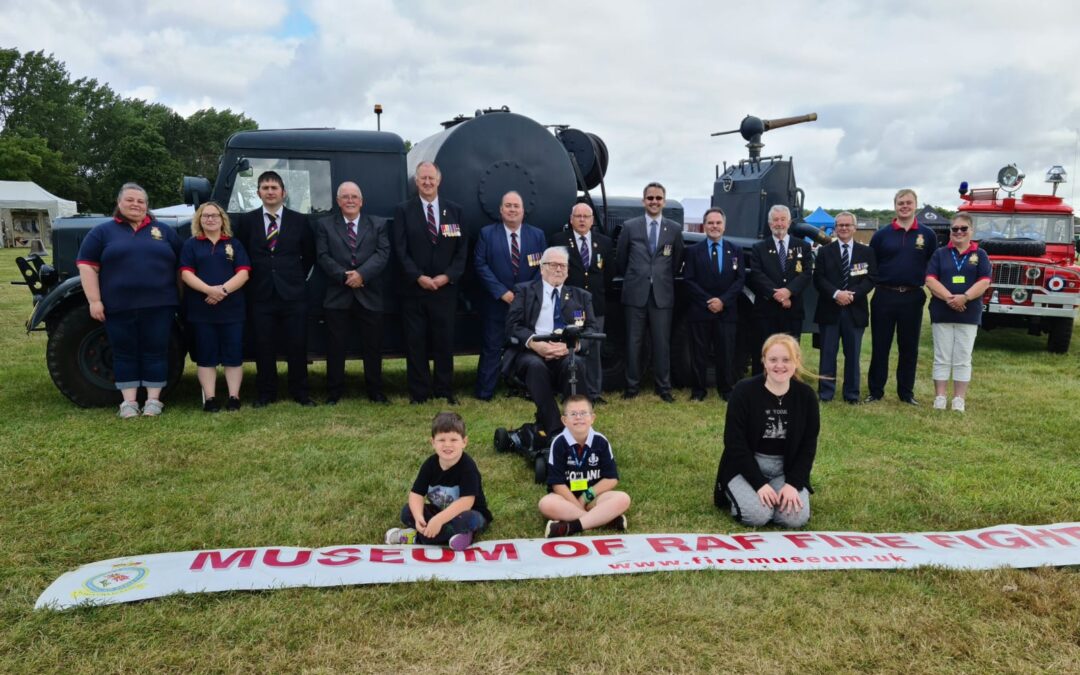 Now that the first part of the weekend has been covered we can now return to normal service and cover this weekend’s activities. With the sun shining, the team turned out in force for the day at Scunthorpe and we had a small catch up with the boss to bring him up to speed with what the volunteers had got up to during his recent unplanned absence. It is good to hear that the family are back to full strength and recovered from COVID.

The upshot of the meeting was basically that we are still very firmly in the hands of RAF Scampton’s disposal process and Defence Infrastructure Organisation, the Government body responsible for disposing of the station. As ever, we hold out with fingers crossed and pray that something comes through soon as the potential of one of our storage areas being taken back for commercial use is still a major risk. Of course, we remain eternally grateful for the support of the owners of our storage areas for their continued support, without which, the Museum and the collection would have folded a long time before now.

After refreshments and pit stops the team split off into two different work parties and broke for the storage area to work on some of the vehicles that needed some minor maintenance and rectification works. The vintage vehicle mantra of ‘if it stops leaking there’s nothing in it’ really does apply here so it’s often a full time job on a Saturday to go around and check on all of the vehicles in the shed. This will definitely get easier if we get our own place but for now it’s a case of breathe in and shuffle between the lines of pallets and vehicles to gain access.

Back at Scunthorpe, the Library was the focus of everyone’s attention during the morning to repack some books that were left out for research to and add some of the new ones to the ever growing pile of boxes. With that complete, and the library ‘squared-away’, the team then focused on one of the boss’ rooms which has literally been turned into storage and the door closed when our ambitions at Scunthorpe ended prematurely. As you’d expect, the boss has managed to amass some size of collection of patches, books and other accoutrements including uniforms and equipment over the 36 years he has been collecting fire related memorabilia. We are reliably informed that the museum collection got the eviction notice from the family home (due to size) but the attic is still under a suspiciously enormous load which suggests some dodgy dealing is going on behind the scenes!

Although the cataloguing work isn’t much to write about week on week, it is an essential task for the Museum to achieve accredited status. This means that the Museum can access resources that otherwise would not have been possible without it. However, as the museum has moved a few times, been in crisis for the last 5 years, has many artifacts donated from many places over the years and the fact it has over 20,000 exhibits, this process is much like painting the forth road bridge (pre-2011) or counting the stars at night. Possible, so long as you have a methodical approach, knowledge, and the mental resilience not to get overwhelmed or go insane!

Upstairs meanwhile, the assistant secretary tapped out the first draft minutes to this year’s AGM in the back office. Although he was on holiday at the time, the wonders of video conferencing enabled live minutes to be taken which could be transcribed. However, the Proposers and Seconders of amendments or agenda items were a bit difficult to work out when they originated from the crowd behind the camera – lesson learned for next time!

Finally, the vehicles behind the building were checked over and worked on to get some of the engines started which means building air pressure will be a lot easier when it comes to move them. This work also revealed a cart load of spares which were stowed on one of the vehicles which will need sorting and cataloguing – a job we will dig into further another day.

Finally, it would be remiss of us not to wish all of the mothers of the Museum staff, the Armed Forces and wider Emergency Service family a very happy Mother’s Day. The volunteers at the museum hope the day is a restful one (sorry partners/family) and that those on Duty across the country are able to find another day to celebrate it with their nearest and dearest.